Published by Nancy Clark on Jul, 7, 2011 under Leadership 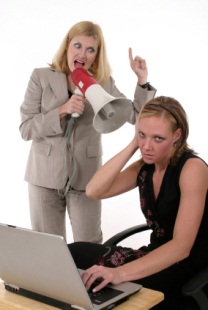 Are You One of the Lucky Few?

Or Do You Have a Horrible Boss?

Horrible bosses come in all shapes and sizes.  The only consistency among them is that they each have the ability to make your life a living hell.   Although most of us would never think of harming another human being, one can’t help but day dream of the demise of a nasty boss.  Considering the number of hours you work and the impact a bad boss has on your work life as well as your home life, it is no surprise that a few employees snap.  In the movie, Horrible Bosses, three friends conspire to murder their horrendous bosses when they realize how miserable it is making their lives.   I wonder how many people will feel a connection to the three friends.  I suspect many more than bosses would like to believe.

I recently conducted an informal survey that shocked me by the response.  I asked a simple a question – what percentage of your bosses have been outstanding?  I suspected that the answers would be relatively low; however, when people started responding, I was genuinely alarmed at how low.   Very few indicated that they had had any outstanding bosses during the course of their careers.  Subsequently, we decided to conduct a more formal survey.  Following are some of the interesting questions and responses:

With all the investment in developing leaders, you can’t help but wonder why we have so many horrible bosses.  There is a lot to be said on that subject, but I thought it would be interesting to identify some of the various types and “flavors” of horrible bosses:

These are just a few of the types of horrible bosses.  To complicate or explain matters, some bosses are combinations of one or more of the above.  As frightening as that may sound, it may explain your boss.  The first step is to understand what kind of boss you have and then to determine your best way of dealing with it.  Maybe you can help or maybe it is time to leave.  Life is too short to be miserable.  Just make sure you aren’t making anyone who reports to you miserable as well.

For information on what makes a great boss, go to www.leaders-inc.com and also read 18 Holes for Leadership by Nancy L. Clark.