When an Employee Behaves Badly 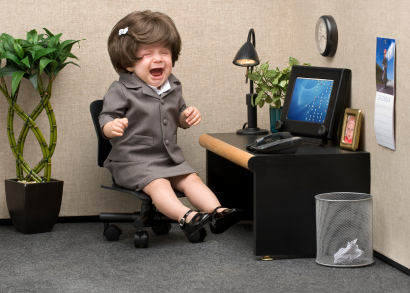 Why they do it and what you can do about it.

As someone who facilitates a lot of meetings and leads a lot of workshops, I get the opportunity to meet a variety of business people.  On occasion, I run into an employee who behaves badly.  Fortunately, it doesn’t happen very often, but when it does, it can be a great learning opportunity for both the “tantrum thrower” and the “tantrum receivers.”

However, I had a recent situation that even surprised me.  Not so much because the person behaved badly, but, I am embarrassed to say, I didn’t handle the situation as I normally would have.  I guess it just highlights that even a seasoned facilitator/coach can be off her game.

Let me paint the picture for you while protecting the guilty.  I was leading a workshop a few weeks ago for an executive team.  I was sharing and transferring the talent management analytics that we use and share with our clients.  These are incredibly accurate and highly validated tools with more than 55 years of research and support behind them.  One manager in the session weighed in early that he didn’t believe that the tools were accurate and basically thought the whole thing was useless.  No surprise, his profile predicted that he would be skeptical.  So, I forged ahead.

The day continued, but his questioning or “inquisitiveness” actually crossed the line into rudeness.  Not just to me, but to the company and to the industry.  He continued to throw barbs and to taint the learning for others.  His behavior and comments went unchecked.

About two years ago, I had another similar situation.  A cross-functional team was trying to come to consensus on endorsing a major software acquisition.  The team had become dysfunctional due to one member.  I was brought in to get the team functioning and to facilitate the final decision meeting.  In the middle of the meeting the one member disrupted the meeting and personally insulted everyone on the team (a basic business tantrum).  I immediately stopped the meeting, suggested we all take a break, and proceeded to meet privately with the tantrum thrower.

I shared that I was there to help him and the team, but that his behavior was not acceptable.  I told him that I would assist him, but that I would not let him return to the meeting unless he apologized to the whole team.  He agreed and rejoined the meeting by apologizing to the team publicly.  There is a lot more to the story, but the bottom-line is that you cannot ignore bad behavior because that reinforces it.

So what did I do wrong a few weeks ago?  I did not stop the workshop and I did not let him know that he crossed the line into rudeness.  I don’t know where my head was at, but I clearly did not handle the situation as I should have.  I should have let him know that I welcome his questioning, but I would not tolerate his insolence.  I should have “invited” him to leave the workshop … his choice– behave professionally or leave.  I feel badly; I reinforced his childlike behavior.

So, why do some employees behave badly?  First, most of them don’t realize they are doing it.  They have behaved that way for years and think it is acceptable.  Others are just not emotionally mature and/or self-aware.  Some don’t have the energy or gas-tank to control their tantrums.  And, still others may have personal agendas that they are trying to promote or are frustrated that they are not getting their way.  Regardless, there are things that you can and should do:

Note:  If the employee crosses the culture and/or  value lines of the organization, more severe action may need to be taken.

My hope is that you do not have to deal with tantrum throwers; but if you do, don’t ignore it and don’t think you can cajole them out of it.   I learned my lesson again!